Vitamin B12 analogues: foods such as spirulina contain pseudo vitamin B12 – molecules that look similar to B12 but are ineffective and even harmful.

Vitamin B12 and B12 Analogues

Vitamin B12 analogues or pseudo vitamin B12 are molecules that are very similar to vitamin B12 in their chemical structure, but which cannot be utilised by the body. Moreover, they do not contain any of the health benefits of vitamin B12 and can even be harmful to health; they occupy important transport molecules and thus inhibit the intake of genuine B12.

When researchers began studying vitamin B12, they could not distinguish the real vitamin from the analogues, since the tests they used measured both forms. Today, however, paper chromatography has been used to clearly identify analogues in many B12 food source. As a result, many foods that used to be considered rich in the vitamin unfortunately turned out to only contain B12 analogues.

Vitamin B12 Analogues and Plant Sources of B12

For vegetarians and vegans this is particularly bad news, as many plant foods that were used previously as vitamin B12 sources instead of supplements in fact contain analogues. As of yet, unfortunately no plant sources of B12 have been verified. Those which allegedly contained the vitamin but which are now suspected/proven to contain vitamin B12 analogues include, for example:

Some of these are still marketed as sources, however tests have shown that they can often even worsen vitamin B12 deficiency (5).

For more information, see our article: Vitamin B12 and Algae

What are Vitamin B12 Analogues?

Vitamin B12 functions biologically like a coenzyme, which enables the work of other enzymes. There are however only two specific forms of B12 that are active as such a coenzyme in the body:

Two further cobalamines can be converted in the body into these forms: cyanocobalamin and hydroxocobalamin. These two forms are not directly active, yet useful precursors of the active coenzymes.

In addition to these there are also more cobalamins, which the body cannot use. In turn, all of these cobalamines belong to the yet larger molecule group of the corrinoids – molecules that like vitamin B12 have a cobalt atom at the centre.

Some of these corrinoids have a very similar chemical structure to vitamin B12, yet have no function in the body and in contrast are even damaging (6). 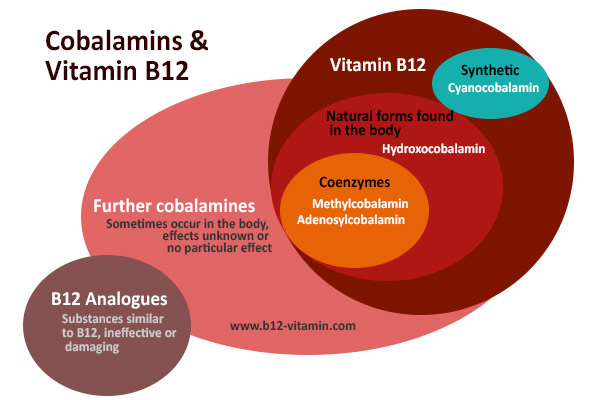 Vitamin B12 Analogues: Not Only Useless, but Harmful too

Vitamin B12 analogues resemble the real vitamin so much that not only tests but even the body confuses the two. Pseudo-vitamin B12 binds to precisely those transport molecules that are responsible for the circulation of B12, putting them in direct competition with each other.

Since the capacity of the transport molecule is limited, the analogues occupy places intended for B12. As a result, it becomes harder for the body to absorb the real vitamin. The more analogues we take in, the worse our body utilises real vitamin B12.

Various studies have shown that analogues bind to all known transport molecules – thus also intrinsic factor (IF), which is primarily responsible for the intake of B12 from the diet and found on the corresponding receptors on the intestinal wall (7). B12 analogues are therefore not only ineffectual but damaging too.

Also in the blood, conventional serum tests cannot distinguish between some analogues and the real B12. A deficiency can therefore occur when serum values appear to be very high. Consequently, other test are increasingly used today, such as the MMA urine test (8, 9).

Vitamin B12 and its Analogues: Hard to Distinguish

To measure the vitamin B12 content in a sample, different methods have been developed. Nonetheless, almost all of them cannot distinguish between B12 and its analogues.

It is clear to see that only paper chromatography, which directly examines the molecules, can definitively distinguish between B12 and analogues.

Vitamin B12 Blood Test and Analogues

Since the B12 serum test is also based on an IF test, it also measures some B12 analogues and thus does not provide reliable information about the proportion of biologically-usable B12.

In order to determine a deficiency and also to verify the B12 content in foods, today there is an increasing trend not to measure the vitamin directly, but certain metabolic products. This provides reliable information about the actual B12 activity in the body. The best option here is the MMA urine test: only if a certain food successfully lowers the MMA level can it be concluded to contain usable vitamin B12.

More on this topic: Vitamin B12 Urine Test

Vegan Vitamin B12 Sources and Pseudo B12

Knowledge of analogues is particularly important for the discussion of vegan B12 sources. Almost all supposed plant sources of the vitamin have transpired to be sources of analogues instead.

Interesting results are also obtained from algae, which show that the fresh plant contains real B12, while the dried plant contains analogues only (2). The process of drying the plant seem to lead to chemical reactions which decompose the vitamin content.

Since it is not the plant itself but resident microorganisms that produce B12, the ratio of B12 to analogues varies extremely depending on which bacteria live in the plant’s growing environment. This can even vary from year to year and is the reason why different studies arrive at such contrasting results. For example, some studies have found that chlorella algae have quite high levels of B12 (10), while others have found it to have no content at all (11).

To date, no plant source has been found that reliably lowers the MMA level, however, there is a lack of corresponding studies to compare plants according to their different cultivation areas. Still, there remains no recognised plant source of B12. In contrast, some researchers even warn against using algae as a source of the vitamin, since the analogues may even inhibit a genuine supply.

Currently, only chlorella, aphanizomenon flos-aquae, dulse and coccolithophorid algae are being investigated as possible sources of real B12. In all others, analogues predominate, so that they can even have negative effects.

The most promising candidate to date remains chlorella, for which all recent studies have found quite high B12 levels.