Homocysteine and Vitamin B12

Homocysteine and vitamin B12: homocysteine is a harmful amniotic acid believed to be involved in the onset of many diseases.

Increased Homocysteine Levels – A Possible Cause of Many Diseases

Despite having been deemed the “new cholesterol”, most people have never even heard of homocysteine. Even so, in the medical world this amniotic acid is at the forefront of attention, having been found to be involved in the onset of numerous diseases. An elevated homocysteine level is associated with damage to the blood vessels and can therefore lead to high blood pressure, heart attacks and strokes (1, 2). Moreover, too much homocysteine has a negative effect on cell health, which has been linked to dementia and Alzheimer’s disease (3). Further links with depression, eye disorders and osteoporosis are still being researched.

High concentrations of homocysteine directly damage the cells, which is why it is referred to as a cell poison. This label is somewhat misleading, since homocysteine is a necessary and natural intermediary substance in the metabolism; at the same time, it leads to a thickening of the blood and so – from two directions at once – contributes to an increased cardiovascular risk (6).

Homocysteine and the Vitamin B12 Supply

Normally, homocysteine is an intermediate product of the metabolism, which accumulates in the cells and is further processed into other substances – for example, the vital S-adenosylmethionine (SAM), which is the basis for the synthesis of many health-relevant substances. However, for the metabolic steps that convert homocysteine, vitamin B12 and folic acid are required; if these vitamins are missing, homocysteine cannot be further utilised and gets stuck in a dead end. Homocysteine thus accumulates and at a certain level becomes critical for health. 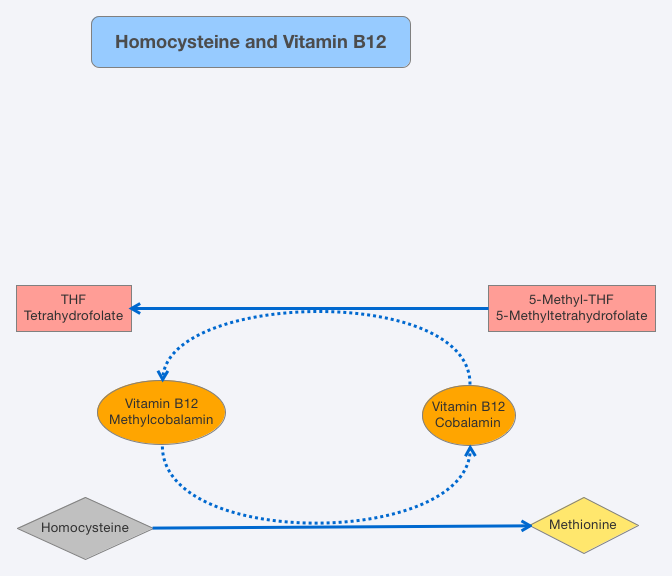 Homocysteinemia – An Indicator of Vitamin B12 Deficiency

Due to the close correlation between high levels of homocysteine and vitamin B12 deficiency, the former is frequently used as an indirect indication of the latter. Elevated homocysteine levels, also known as homcysteinemia, often signpost B12 deficiency – although the absence of folic acid may also be a cause. Since measuring B12 in the blood serum is highly unreliable, homocysteine levels are often also calculated in tests in order to better interpret results.

The homocysteine values required for diagnosis are measured in the blood. Below are the common interpretations of these values:

The Homocysteine Level: Risks for Older People and Vegans

High homocysteine levels are particularly common in elderly people and vegans; the cause is often a lack of vitamin B12. While the vegan diet naturally contains very little B12, it is mainly absorption disorders that cause a deficiency in older people. About 40-60% of older people have increased homocysteine levels.

If you consume a lot of alcohol and/or coffee, take certain medications and suffer from stomach, intestinal or liver diseases; you are also at risk of high homocysteine levels. Further details can be found in our vitamin B12 deficiency charts.

Homocysteine – Only an Indicator?

The assessment of homocysteine as a risk factor in the onset of diseases is also viewed critically. For example, Norbert Fuchs argues that homocysteine is not itself the cause of diseases, but only the indicator of a nutrient deficiency. Hence, he believes that it is the underlying nutrient deficiency that is the real problem (7).  Homocysteine merely indicates a disturbance in methyl group transfer, which is of major importance in the formation and regeneration of new cell structures, haematopoiesis, cardiovascular metabolism and the synthesis of neurotransmitters.

Arguably, the substances involved in this context – choline, betaine, vitamin B6, vitamin B12 (methylcobalamin), folate (methyl-THF) and SAM – all have a much more direct connection to the symptoms attributed to homocysteine and are therefore often the root cause of a disease. A reduction of homocysteine is therefore a short-sighted solution; instead, the supply of nutrients should be measured, controlled and optimised.

On the other hand, some recent studies do indicate the direct causal involvement of homcysteinemia in the onset of various diseases.

Whether homocysteine is just an indicator or a harmful substance itself is still under investigation. Regardless, the best precaution against high homocysteine levels and possible nutrient deficiencies is maintaining a sufficient, balanced supply of vitamins. B12 and folate deficiencies are exceedingly widespread; whereas vitamin B6 or betaine are required less by the body.

In addition to the usual vitamin B12 supplements, there are now also special combination supplements that are tailored to the reduction of homocysteine and contain all relevant nutrients. Whether such supplements are actually required can first be determined by a simple blood test. In any case, vegans/vegetarians and elderly people in particular should pay close attention to their B12 supply; usually a simple B12 supplement is enough.