Vitamin B12 forms: the active ingredients of cyanocobalamin, hydroxocobalamin, methylcobalamin and adenosylcobalamin in comparison. Effects and differences.

The Various Forms of Vitamin B12

Vitamin B12 is the most chemically complex of all the vitamins. Its chemical name is “cobalamin”, derived from its central cobalt atom. The impressive formula – C63H88N14O14PCo – gives an idea of the size of the molecule that constitutes vitamin B12. Nonetheless, cobalamin almost never occurs in its chemically pure form, but is usually bound to other molecules. These different binding partners determine the names of the resultant vitamin B12 forms.

Vitamin B12 Forms in Food

In foods the most common vitamin B12 forms are:

Vitamin B12 Forms in the Body

In the body, absorbed B12 works as a coenzyme (further info: Vitamin B12 Benefits), which supports the functions of a multitude of important enzymes. Only two forms of B12 are active as a coenzyme in the body:

Hydroxocobalamin (a.k.a. hydroxycobalamin) is not itself a coenzyme form of B12, yet can easily be converted by the body into both methyl- and adenosylcobalamin, and is a common transitional form in the B12 metabolism. Furthermore, it binds particularly well to the body’s transport molecules and thus circulates for a long time in the blood – this makes it the best storage form of the vitamin.

Vitamin B12 Active Ingredients in Supplements

Likewise in oral supplements such as tablets and capsules, cyanocobalamin is still the most used active ingredient. Although methylcobalamin and adenosylcobalamin are the bioactive forms of B12, they are unfortunately very chemically unstable outside of the body – mainly due to their photosensitivity – and therefore more difficult to produce.

Recently, however, methylcobalamin and adenosylcobalamin have become increasingly used in supplements because of their clear therapeutic advantages (see below).

The Best Vitamin B12 Supplement is a Mixture

When it comes to supplements, the ideal content is a mixture of all the natural B12 forms, as the body urgently needs each one for different tasks. The two active forms are produced on separate metabolic pathways and perform completely different functions. Whilst for a long time an intake of methylcobalamin alone was considered sufficient, today this has been increasingly drawn into question (11).

Instead of taking a single active ingredient, a combination of all of the natural B12 forms is the optimal solution – as it mirrors the B12 content in foods.

The ideal B12 supplement contains a mix of methylcobalamin, hydroxocobalamin and adenosylcobalamin (11).

For details on how much of a supplement to take, see the article: Vitamin B12 Dosages. Plus, to learn more about how to check your vitamin B12 status, see: Vitamin B12 Deficiency Test.

Activity Spectrum of the Bioactive Forms

The following table shows the activity spectrum on both of the bioactive forms of B12: methylcobalabim and adenosylcobalamin.

As we have discussed, for many years B12 supplements mainly contained cyanocobalamin, a synthetic form of B12 that is not directly bioactive and is only found naturally in the body or diet in minor traces. Cyanocobalamin is however very straightforward and cheap to manufacture – and is particularly stable.

Cyanocobalamin has been well researched and has proven to be very effective and well utilised in the body, in practice. It has been used very successfully for many years in B12 therapy to treat various pathologies. Despite this, cyanocobalamin has been increasingly criticised in recent years, due to the following reasons:

Moreover, concerns about exposure to cyanide poisoning are eliminated when hydroxocobalamin is used. Interestingly, hydroxocobalamin is even used to detoxify cyanide. Cyanocobalamin, which is detectable with a normal diet in the body, is usually the result of smoke poisoning or heavy smoking. Especially smokers should thus avoid cyanocobalamin and use other forms of B12 instead – this will keep their exposure to cyanide down, and will even help with detoxification.

Hydroxocobalamin is also an effective scavenger of nitrogen oxides (nitrogen radicals) responsible for the so-called nitrosative stress involved in the development of many diseases.

Today there are evermore supplements available that contain methylcobalamin B12. This form can be used directly in the body, without need for conversion, and is better utilised than cyanocobalamin (5).

At comparable oral doses almost identical B12 concentrations were initially detected in the blood serum. However, whereas in the case of cyanocobalamin, large quantities of unused B12 were excreted; methylcobalamin increased cellular levels of B12 and filled the body’s store of the vitamin.

This is probably explained by the fact that S-adenosylmethionine (SAM), which is important for many epigenetic processes, is regenerated by methylcobalamin, whereas cyanocobalamin reduces it (as we explored above). Methylcobalamin B12 has also been shown to be superior in tackling sleep disorders, since it is believed to influence melatonin synthesis; whereas cyanocobalamin does not have this effect (7).

Conversion of the Vitamin B12 Forms

The following graphic shows the conversion steps required for the various vitamin B12 forms: 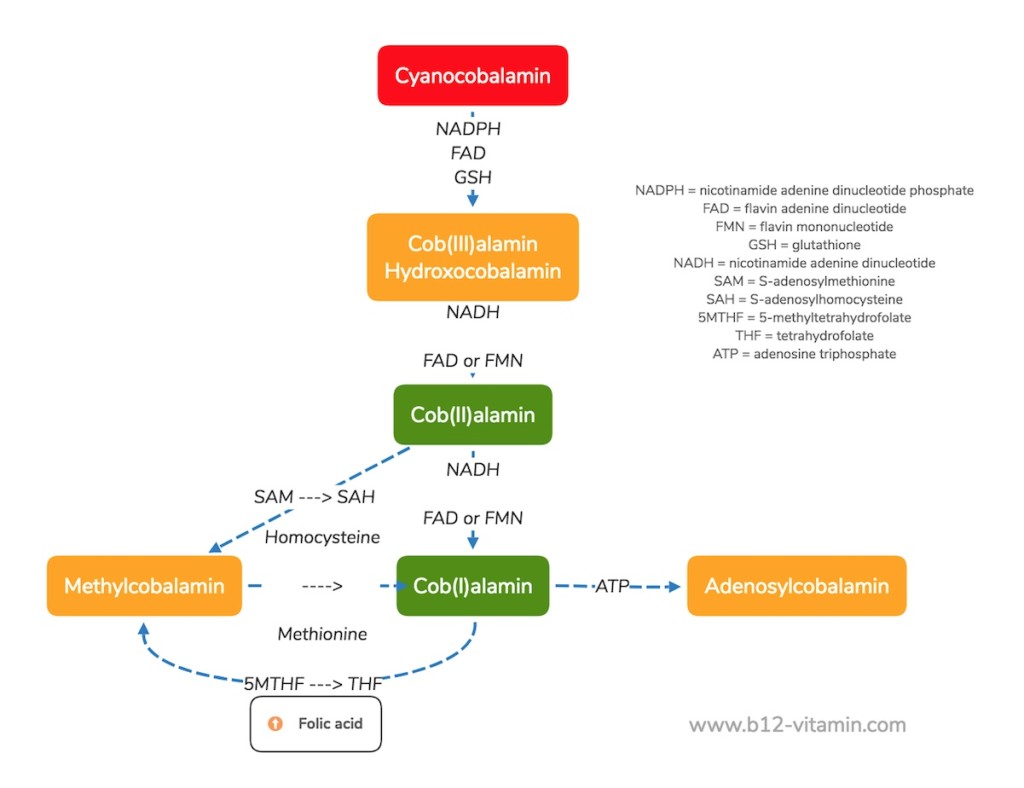 The Most Well-Known Vitamin B12 Forms

Apart from the ones we have discussed, some other forms of vitamin B12 are known. The following table gives an overview of all of those currently under investigation:

Vitamin B12 – One Vitamin, Many Effects

Not all forms of vitamin B12 are the same. The metabolisation of each form is quite different and the effects differ considerably. While cyanocobalamin has proved effective in preventing vitamin B12 deficiency, there is increasing evidence that the coenzyme B12 forms have a distinct advantage and better spectrum of action in many specialised applications. They do not share the drawbacks of cyanocobalamin, but seem to have significant benefits.

Hydroxocobalamin has certain advantages, especially with its detoxification effect and excellent storability, which helps to ensure a long-lasting B12 supply. This form is also easier for the body to utilise than cyanocobalamin.

Intuitively, it makes sense to assume that the B12 forms found naturally in food are exactly those our body needs. When purchasing supplements, the three natural forms and especially the coenzyme forms should be given preference where possible.

What is more, the vitamin B12 forms we have discussed above do not work alone in the body, but are part of a large complex of B vitamins and operate in combination with a number of other vitamins and minerals. To read more on this, see our article: Vitamin B Complex.