Vitamin B12 and Nitrosative Stress

Nitrosativer stress: an excessive exposure to NO radicals is the cause of multiple illnesses. How can vitamin B12 help?

What is Nitrosative Stress?

Whilst terms such as “antioxidants”, “free radicals” and even “oxidative stress” are now widely used; most people have never heard of “nitrosative stress”, despite its major heath significance.

Nitrosative (or nitro) stress is a form of oxidative stress – yet here it is not oxygen radicals that damage the body, but an excessive production of nitrogen monoxide radicals (chemical abbreviation: NO). Through an oversupply of NO radicals and the increased formation of dangerous secondary products – such as the highly toxic peroxynitrite – cells, mebranes and DNA can be damaged and a whole range of illnesses and symptoms can occur (1, 2).

Vitamin B12, particularly in the form of hydroxocobalamin, is the natural opponent of NO and renders it harmless in the body. One of the many benefits of vitamin B12 is that it is a very effective NO scavenger and is successfully administers to fight nitro stress (3, 4).

NO Radicals: Friend or Foe?

As is so often the case with the careful chemical balances within the body, in the case of nitrosative stress it is the dose that makes the poison: nitrogen monoxide is actually an important endogenous substance that fulfils numerous biological functions. NO relaxes the blood vessels, lowers blood pressure, is part of the body’s immune system and even acts as a messenger substance in the nervous system.

However, the NO level must be tightly regulated by the body through various systems and held within a very narrow window. Nitrosative stress occurs when there is an excessive amount of NO radicals in the body. These radicals and their derivatives are highly dangerous as they knocks multiple biological systems out of balance. As a result, researchers have identified nitro stress as the cause of numerous clinical pictures (5-7).

The Consequences of Nitrosative Stress

NO radicals are highly active biologically, they can penetrate all biological membranes and take effect on the entire physical systems very quickly. Unlike other messenger substances, NO radicals do not dock to receptors, but bind directly to various enzymes inside the cells, thereby inhibiting their function. Plus, they alter the membrane potentials of cells and cell organelles, opening certain membrane channels. This causes a drastic change of the chemistry within the cell, with various consequences for the cell metabolism.

Through the oversupply of NO radicals, the highly reactive peroxynitrite is increasingly created, which inhibits further enzymes (8) and causes severe damage to cells (9, 10). Nitrosative stress can consequently trigger a whole range of negative symptoms.

Researchers of alternative medicine such as Professor Martin Pall, Dr Heinrich Kremer and Dr Bodo Kuklinski are all of the opinion that nitrosative stress is one of the most crucial variables in the emergence of chronic diseases. It is thus a matter of urgency that anyone who suspects themselves to be experiencing nitrosative stress conducts the appropriate tests and starts taking countermeasures (see below).

Through nitro stress and its derived product peroxynitrite, the important amino acids of tryptophan and tyrosine are rendered ineffectual. These two amino acids however play a crucial role in the synthesis of further neurotransmitters and hormones:

When production of these neurotransmitters is blocked, it leads to a whole range of symptoms: serotonin and dopamine are considered to be “happy hormones” because of their major impact on mood, motivation and psychological stability. Serotonin and melatonin regulate sleeping patterns. Together these neurotransmitters have an enormous influence on blood pressure and the central nervous system.

NO Stress and Damage to the Mitochondria

The energy powerhouses of the cells, the mitochondria, are particularly vulnerable to nitrosative stress. Mitochondria are controlled by a particular genome, which is 10 times more sensitive to NO stress than all cell DNA. While many of the consequences of nitrosative stress are reversible, if exposure is long term, irreversible damage to certain enzyme functions and in the genome of the mitochondria can occur, which can even be inherited maternally (30).

Such mitochondriopathies – either through maternal inheritance or as the consequence of a self-acquired mutation of the mitochondrial DNA – are becoming increasingly common (31, 32). Nitrosative and oxidative stress are probably the main causes of these diseases.

NO Stress: The Cause of Many Chronic Diseases?

For the first time, the biochemical processes resulting from NO stress can be used to conclusively explain various diseases in chemical terms, some of which have remained a mystery until recently. These include:

Multiple therapists worldwide have reported very good treatment results based of the connection between NO stress and the above-mentioned diseases. Plus, clinical studies which confirm this postulate are on the increase. Nevertheless, the theory of nitro stress as the cause of these diseases remains the subject of scientific debate and has not yet gained general recognition.

Vitamin B12 and NO Stress

The theory of Professor Pall and his colleagues not only explains conclusively for the first time how these diseases develop, but also why vitamin B12 has a good effect in almost all cases. B12 is the natural opponent of NO radicals and simultaneously an important part of the body’s own regulation system for nitric oxide. Through a variety of mechanisms, the vitamin ensures both the controlled formation, as well as the inhibition and deactivation of NO (49, 50). B12 is therefore a central regulator of the body, keeping the NO level within the biologically desired range (51, 52).

Besides its function in the regulation of NO formation, vitamin B12 is additionally an effective NO scavenger. The B12 form of hydroxocobalamin in particular binds reliably to excessive NO radicals and neutralises them. Cyanocobalamin, methylcobalamin and adenosylcobalamin, on the other hand, show far less activity with respect to the neutralisation of NO radicals (53, 54). This action is most probably a central function of hydroxocobalamin, which accounts for around 50% of the free vitamin B12 in the blood (55).

In addition to hydroxocobalamin, reduced cobalamin – a biological intermediate form – is particularly reactive to NO radicals (56). It cannot yet be used directly for medical purposes, however, and thus hydroxocobalamin is currently regarded as the best vitamin B12 form for nitro stress.

Nitrosative Stress and Vitamin B12 Deficiency

Vitamin B12 administered for the detoxification of NO radicals is oxidised and largely excreted; therefore no longer available for its further vitamin functions. Nitrosative stress can therefore be the catalyst of a vitamin B12 deficiency, since a high exposure to NO consumes large amounts of the vitamin. Accordingly, the vitamin B12 dosages required to treat nitro stress are higher than the daily requirement; injections or very high oral doses are often used.

A large component of the dangerous effects of nitrosative stress are not due to the NO radicals themselves, but due to the secondary product, peroxynitrite (57, 58). Peroxynitrite is created through a reaction between NO and the oxygen radical, superoxide: 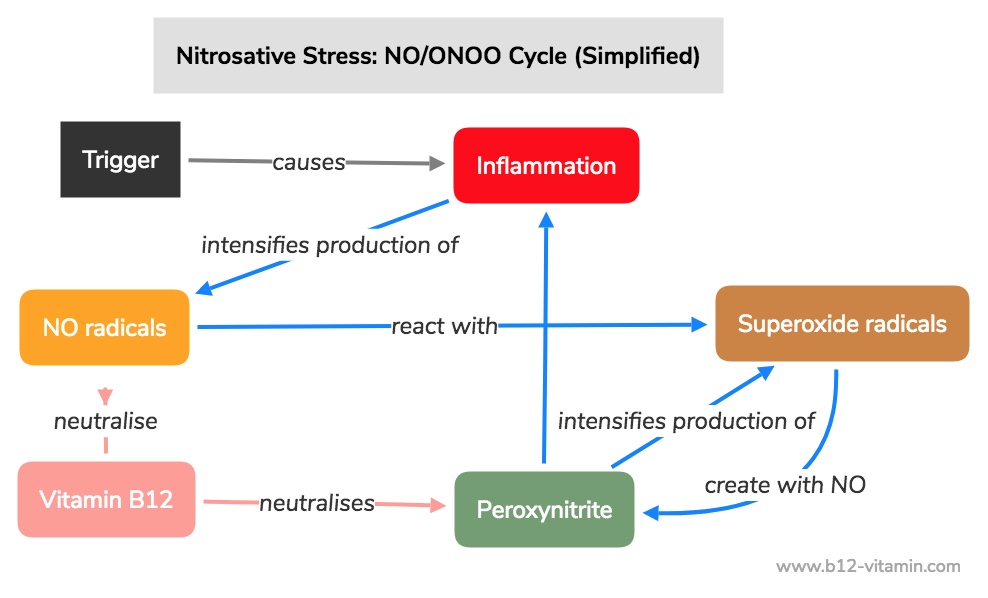 Through inflammations, the production of NO and superoxide increases by a thousand times, which subsequently leads to a million-fold increase in the formation of peroxynitrite (59).

This vicious circle is triggered by various factors that cause the body’s own NO production to increase:

Once triggered, the chronic cycle persists even if the causal trigger has long since disappeared. It cannot be eliminated with conventional therapies, as these usually only target individual symptoms with medicines, which often even aggravate the cycle.

Nitrate and NO Radicals

The NO/ONOO- vicious circle is further inflamed by the fact that many conventional foods are contaminated with large quantities of nitrite and nitrate: fertiliser, pesticides, conservatives, plasticisers, artificial colourings and multiple other chemical additives containing unnaturally high amounts of nitrogen compounds. We also absorb nitrogen compounds through the skin via cosmetics, colourants and textile additives; and even through the air, where pollution is almost ubiquitous.

Nitro stress can be determined through a simple urine test, in which certain parameters are measured:

Urine tests can be conducted by both doctors and naturopaths. Home testing kits are also available online.

Nitrosative stress is rarely diagnosed by GPs and many patients are simply sent home with the assertion that their symptoms are “psychosomatic”. This often leads to years of chronic suffering or even false diagnoses and treatments. This is all the more unfortunate because today nitrosative stress can be treated quite easily with nutrients alone. Once the trigger has been removed, it is necessary to break the vicious circle and replenish the nutrients consumed during its course. The therapy has three important elements:

A combination of vitamin B12 (hydroxocobalamin), turmeric and green tea is ideal for home use. In severe cases, however, intravenous (IV) therapy is sometimes necessary in order to effectively break the cycle.

The new findings on nitrosative stress could trigger a paradigm shift in the treatment of many diseases, which previously could not be explained in medical terms and were either falsely treated or not treated at all – often alleged to be “psychosomatic” illnesses. The decoding of these biochemical mechanisms provides for the first time a solid theoretical basis for the explanation and treatment of these diseases and also for the versatile, therapeutic and stabilising effects of vitamin B12. As a natural antagonist of NO radicals, B12 is a central therapeutic agent in this context, likely to become even more important over the coming years.