Reasons for Vitamin B12 Deficiency

What Causes Vitamin B12 Deficiency?

The causes of vitamin B12 deficiency can be split into three main groups:

This is due to an undersupply of the vitamin through food, which is often the case for vegans/vegetarians and people with an unbalanced diet.

In this instance, more vitamin B12 is temporarily needed than is covered through the diet – even if the usual supply is adequate. This can occur as a result of pregnancy/lactation, disease, bodily strain due to toxins/free radicals, a severe crisis or high stress situations.

Here the body simply cannot absorb and subsequently utilise enough vitamin B12, even though there is a sufficient dietary supply. Absorption disorders are particularly common in older people and even when there is a slight inflammation of the gastrointestinal tract, they can occur. Malabsorption can also be due to reactions with alcohol or taking medications.

Groups at Risk of Vitamin B12 Deficiency

People at risk of vitamin B12 deficiency usually belong to one or more of the following groups:

The Causes of Vitamin B12 Deficiency in Detail

In the following, we will illuminate the causes of vitamin B12 deficiency in more depth, including examples.

When it comes to food sources of B12, the vitamin is relatively rare and only present in relevant amounts in animal products. Although traces may occur in/on plant foods, according to current knowledge these amounts are not significant enough to cover the body’s vitamin B12 requirement. Vegetarians and vegans are therefore often advised to take supplements.

In animal products, vitamin B12 is mainly found in offal – rarely on the menu of most meat-eaters today. Plus, the vitamin in food is heat sensitive; its content is significantly reduced through cooking. As a result, even an omnivorous diet does not always provide a sufficient amount of B12.

2. Increased Requirement of Vitamin B12

The causes of an increased requirement can be split into three main groups:

Strain due to toxins or free radicals

One of the many benefits of vitamin B12 is that it detoxifies heavy metals, nitric radicals and many other toxins, by binding to them so that they are quickly excreted and no longer available for biological processes. Therefore, if the body is experiencing toxic or radical strain, there is an increased B12 requirement.

In crises and high-stress situations, the vitamin B12 requirement greatly increases. This can be down to a number of reasons, for example: high physical and/or mental strain; hard physical labour; psychologically stressful situations; strong, persistent emotions such as fear, anxiety, sadness and heartache; as well as when undertaking difficult emotional work, such as in therapy.

On one hand, an increased requirement is explained by a temporary disruption to absorption, since stress leads to poor blood circulation in the digestive organs and an unfavourable ratio of gastric acid to enzymes. On the other hand, an excessive amount of vitamin B12 is required for the production of hormones and neurotransmitters. Especially hormones like adrenalin, norepinephrine and serotonin are released in large quantities in stressful situations, which increases the consumption of B12. If stress persists, deficiency can occur, even where there is a good dietary intake of vitamin B12.

Pregnant and breastfeeding women also have an increased need for vitamin B12. Here, the vitamin requirement doubles, as the child has to also be supplied and often the usual diet no longer provides enough.

In the event of vitamin B12 malabsorption, the body cannot absorb the vitamin contained in foods into the bloodstream, so that it is excreted unused. There are only two points in the body where it can be absorbed:

While the majority of vitamin B12 is absorbed through the small intestine, even minor irritations and inflammations of the intestinal mucosa can massively impair the absorption capacity. Plus, active absorption requires a special glycoprotein, intrinsic factor (IF), which is formed in the stomach. If there is a shortage of IF, only small amounts of B12 can be absorbed via passive diffusion. For these reasons, gastrointestinal inflammation is one of the most common causes of B12 deficiency.

Unfortunately, in industrialised countries such inflammations are very common, due to poor eating habits. Consequently, more and more people suffer with vitamin B12 deficiency even though they obtain a sufficient supply of the vitamin. In the case of chronic gastrointestinal diseases such as chronic gastritis or Crohn’s disease, the B12 intake is severely impaired and very high doses of B12 must be taken frequently for the duration of the disease in order to prevent deficiency. The case is similar for liver and pancreatic diseases, and people who have had parts of their intestines or stomach removed often have to take high doses of vitamin B12 throughout their lives to guarantee their supply. Alcoholics often have damaged stomach and intestinal walls, so that they too end up with deficiency. It is also common in heavy smokers, as the vitamin B12 metabolism is disturbed. Another cause of B12 deficiency due to absorption disorders, is the use of various medications – the most common of which are for: heartburn, contraception, rheumatism and diabetes.

Vitamin B12 Supplement Dosages for Deficiency

All forms of B12 deficiency are treated via an administration of vitamin B12 supplements. In the case of malabsorption, a search for the root cause must also take place, since chronic intestinal inflammation or parasites have other negative effects on the body.

There are two main types of B12 administration:

More details can be found in our article: Vitamin B12 Deficiency Treatment and Therapy

Plus, for further information on different vitamin B12 dosages, click here.

Vitamin B12 Deficiency and Medicines

A whole range of medicines significantly inhibit the absorption of vitamin B12, which is why deficiency occurs more frequently in patients on medications for other health problems. Interactions also exist with various other substances and drugs. The following table provides a rough overview of substances that have a particularly critical impact on vitamin B12 absorption.

The following diagram gives an overview of the metabolism of vitamin B12 and the specific points at which deficiency can be triggered. 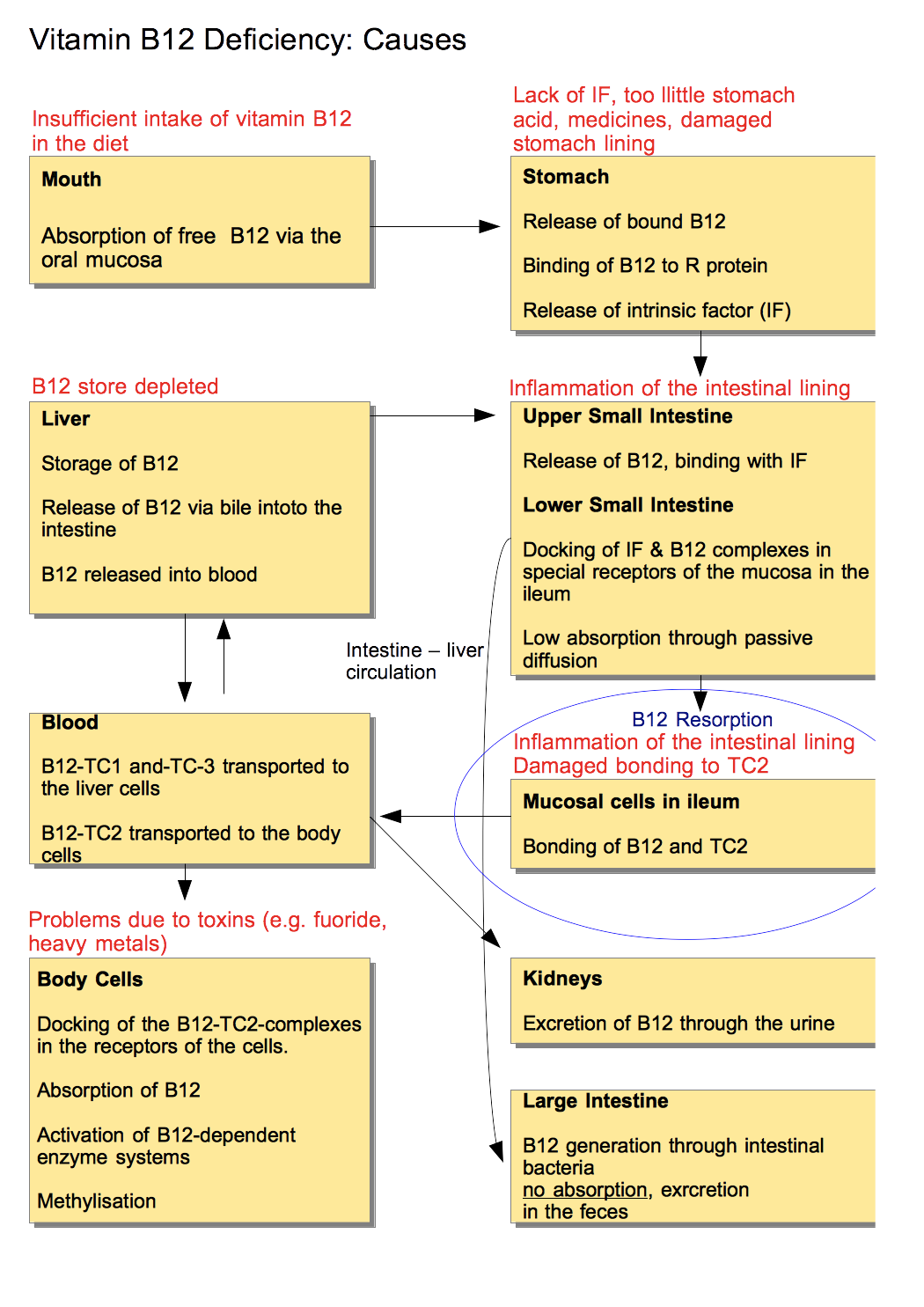 Visit our article Vitamin B12 Deficiency Symptoms to discover the various ways in which B12 deficiency can manifest in the body.