Vitamin B12 benefits: how exactly does vitamin B12 contribute to good health? How does it work? Why do we need it? What is the impact of vitamin B12 deficiency?

Vitamin B12 is an essential vitamin; the body cannot create it alone and therefore without a regular supply of B12 it is not possible to maintain good health in the long term. Biologically-speaking, vitamin B12 is vital – yet what are the main effects that it has on the body?

Vitamin B12 is a fundamental, biological building block, essential to these important metabolic processes. Without the vitamin these vital functions cannot be maintained, having detrimental repercussions on the body.

Because vitamin B12 is involved in several fundamental metabolic processes, it plays a central role in maintaining general health. Therefore, vitamin B12 deficiency can have serious consequences.

These are just a few examples of the immense and diverse effects of B12 on health. In fact, there are a myriad of vitamin B12 deficiency symptoms; in many respects we are just beginning to fully comprehend the importance of this vitamin.

For more information on diagnosing deficiency, see our article: Vitamin B12 Deficiency Tests.

How Does Vitamin B12 Work in the Body?

How might we begin to explain the various biological workings of vitamin B12? The simplest way is to focus on the three vitamin B12 forms and pathways through which the vitamin functions: 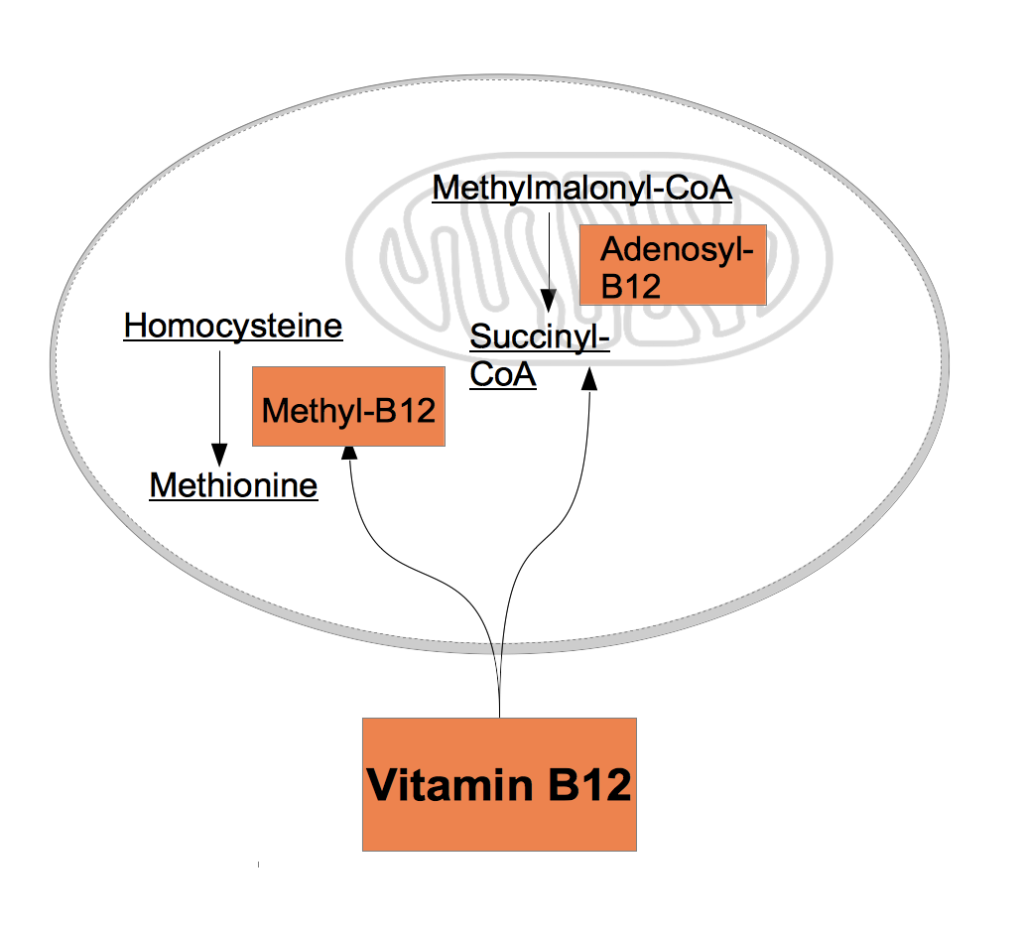 Methylcobalamin and adenosylcobalamin are known as the “bioactive coenzymes” of vitamin B12: only in these chemical forms can the vitamin be directly utilised in the body. Hydroxocobalamin, on the other hand, does not function as a coenzyme, but scavenges toxins/free radicals.

In the cell plasma, as methylcobalamin, vitamin B12 is involved in the activation of folic acid and the conversion of damaging homocysteine into the important amino acid, methionine. Methionine, in turn, is the source of S-adenosylmethionine (SAM), a central methyl group donor needed to synthesise many hormones and neurotransmitters. Without vitamin B12, another vitamin – folic acid – cannot become active, which can indirectly trigger many other problems.

Above all, these two processes explain the tremendous impact of vitamin B12.

Hydroxocobalamin does not work as a coenzyme, but passively in the blood and cell plasma, where it binds to toxic substances, like cyanide and nitric oxide, and transports them out of the body.

All three natural forms of vitamin B12 have important, independent functions in different biological cycles. The body therefore needs all three forms in equal measure – and fortunately they are interconvertible.

When it comes to vitamin B12 supplements, many experts believe that the coenzyme forms of B12 are the ideal agents to obtain (18). In contrast, the long-term use of artificial cyanocobalamin supplements does not have a direct biological effect and must first be converted in the body into one of the three natural forms of B12. It is therefore used less and less today and has sometimes been heavily criticised (19).

In natural B12 food sources there is always a mix of the three organic forms of B12 – a condition that is recreated in some B12 supplements today. In our opinion, supplements that contains a mix of all three natural B12 ingredients are optimal for achieving health benefits.

The 5 Functions of Vitamin B12 in Detail

In the following, we will take a detailed look into the five main biological areas in which vitamin B12 takes effect. There are also certain link available, which lead to an even more detailed explanation of these areas.

1. Vitamin B12 and DNA Synthesis

The most well known working of vitamin B12 is its influence on blood formation, as a severe deficiency of the vitamin leads to anemia. At the same time – and less obviously – many other areas are affected, in which cell division plays a major role, including in the brain and spinal cord. B12 deficiency causes transcription errors during DNA synthesis, which is likely to increase the long term risk of cancer and is linked to many chronic diseases (17).

2. Vitamin B12 and the Energy Metabolism

Equally well known is the fact that vitamin B12 has a significant impact on energy levels and physical performance. This is because the vitamin is directly involved in cellular energy production. Energy is transmitted in the body through a molecule called ATP (adenosine triphosphate) – a universal energy source that stores the energy gained from food and makes it available for physical processes. Fats, proteins and sugars are first broken down by the body and the intermediate products are then converted into water, CO2 and ATP in what is known as the citric acid cycle. In this cycle, vitamin B12 plays a crucial role – without it, the body does not manage to generate much-needed energy from food.

3.Vitamin B12 and the Lipid Metabolism

Vitamin B12 is also involved in the metabolism of membrane-forming lipids: the building blocks of the cell membrane and the myelin nerve protection layer. Unfortunately, the exact interconnections are not yet fully understood. In the future it may emerge that B12 is somewhat vital in this area, as the cell membrane is, in a sense, the communication surface of the cell. The consequences of B12 deficiency on the lipid metabolism however remains under-researched – better understood are the effects on the nerves.

Vitamin B12 and Nerves

Perhaps the most important long-term effect of vitamin B12 is its function in the central nervous system, including the spinal cord and brain. Here, the vitamin is involved in the formation of the myelin sheaths: a protective covering around the nerves, which can roughly be compared with the isolation of electrical cables. In the case of diseases such as multiple sclerosis (MS), this protective layer is destroyed, which means that the nerves can no longer transmit their signals correctly. Such conditions are also referred to as demyelinating diseases and are suspected to be closely related to B12 deficiency. Above all, a connection between B12 and MS is suspected, but so far insufficiently researched (2, 3).

More information: Vitamin B12 and Nerves

Vitamin B12 has a Regenerative Effect on Nerves

All in all, vitamin B12 is said to play a major role in the regeneration of nerves and can thus be applied as a potential therapeutic agent for a wide range of diseases. In studies on rats, it has now been shown that very high doses of methylcobalamin are capable of greatly enhancing the regeneration of nerves, which could be of great help in the treatment of a number of diseases (6). However, human studies have not yet been conducted.

Further reading: Vitamin B12 as Medicine

Vitamin B12 for Multiple Sclerosis, Fibromyalgia and Chronic Fatigue Syndrome

Vitamin B12 has been experimentally studied and successfully used in the treatment of MS, fibromyalgia, and chronic fatigue syndrome (CFS). Which workings of B12 play a role here is not yet fully clear. While in MS the myelin-forming property of the vitamin has been suggested as a key factor; in fibromyalgia and CFS it has been proposed that the properties of B12 as a homocysteine depressant (7) or nitric oxide scavenger are responsible for positive results (8).

Vitamin B12 and the Brain

The vitamin also plays an central part in the development of the brain. Some rare hereditary diseases prevent the synthesis of the B12 coenzymes, methylcobalamin and adenosylcobalamin. From studying these diseases, we now know that the vitamin is central to cerebral development and function (9). Without it, the brain develops poorly, potentially leading to a number of disorders and underdeveloped cognitive abilities.

Studies on children with strict vegan and vegetarian diets and B12 deficiency showed significant underdevelopment in the brain, a lower brain mass and a disadvantaged mental development. However, such negative consequences can usually be combatted through B12 supplements (10-16). Once again, it is the myelination of the nerves that is responsible for much of the brain damage caused by B12 deficiency. But also different methylation processes, due to a B12-related deficiency of S-adenosylmethionine, seem to be causally involved in neuropsychiatric problems.

Another under-researched area – that nonetheless shows great potential – is the connection between B12, hormones and neurotransmitters. Here, the vitamin is important for: maintaining mental abilities, perceptions and thought capacity; the function of the brain; and the regulation of physical processes through various neurotransmitters. The spectrum of action here ranges from the treatment of severe mental illness, which can be partially or even completely cured through B12 therapy, to the treatment of minor sleep disorders.

Vitamin B12 and Mental Illness

The association between B12 and various neuropsychiatric diseases is becoming increasingly clear (4). Even in the absence of extremely low levels of B12, these diseases can occur with pronounced B12 deficiency anemia. Sometimes even a slight vitamin B12 deficiency can lead to such diseases. In certain cases it has been reported that the most severe symptoms can be completely rectified through the administration of the vitamin (5). This is partly explained by the demyelisation of the nerve cords in the spine. In other mental illnesses such as depression, B12 plays a role because it has an effect on the formation of neurotransmitters – special chemical messengers that significantly affect our mood.

More information on this topic can be found in the article: Vitamin B12, Brain and Psyche

5. Vitamin B12 for Detoxification

B12 has further effects that are not directly related to its central functions in the body. Hydroxo- and methylcobalamin can be used to detoxify the dangerous substance cyanide (also hydrocyanic acid); the vitamin binds to cyanide so that it can be excreted through the urine. B12 is used, for example, in the treatment of burn victims who are suffering from smoke poisoning. Small amounts of cyanide, which we take in through the environment, can be detoxified by B12. This is especially relevant for smokers who constantly inhale cyanide through cigarettes. Yet even more effective is its role as an opponent of free radicals and its effect in combatting nitrosative stress – an underestimated and possibly central element in the development of many diseases.

Nitrosative Stress: B12 as a Nitric Oxide (NO) Scavenger

In contrast, the negative effects of deficiency on the mitochondrial function, cholesterol metabolism, synthesis of steroid hormones (sex hormones) and formation of carcinogenic nitrosamines are relatively well comprehended. Vitamin B12 binds to nitric oxide to form nitrosocobalamin, which can easily be excreted through the urine. In orthomolecular medicine, quite dramatic healing effects have been reported as a result of B12 treatments on various forms of nitrosative stress (1).

The Benefits of Vitamin B12 for Skin

Even when used externally on the skin, vitamin B12 acts as a NO scavenger, which is why there are many vitamin B12 creams on sale. In 2009, B12 cream was trumpeted for some time as a “miracle cure” against eczema and psoriasis. Even so, the scientific evidence is still thin and the effect of B12 cream remains under question by many dermatologists, even though individual patients have reported successful results. Nevertheless, an internal consumption of B12 should have positive effects on skin diseases in certain cases – probably due to the role of the vitamin in tackling nitrogen oxides.

Vitamin B12 Benefits: An Inconspicuous Vitamin with a Mighty Effect

While other vitamins, such as C, D and E, have recently received lots of attention, vitamin B12 is still a somewhat inconspicuous vitamin. However, since evermore people are becoming vegetarian and vegan, B12 has earned significantly more recognition. This will probably increase in the long term, as the multiple benefits of vitamin B12 continue to surprise researchers. It is thus becoming increasingly clear that the vitamin plays a major role in both our physical and mental health.